The Spanish team completes the third meeting of the season played at the Circuit de Barcelona-Catalunya with two wins in the JuniorGP™ category and another in the European Talent Cup.

The Barcelona motorsport school celebrates the 150th victory in its history with the double won by José Antonio Rueda and the triumph of Brian Uriarte.

“It was a historic weekend that we will always remember. The three victories achieved demonstrate the great moment in which both our drivers and all the members of the team are. In addition, we have been able to celebrate our 150th victory as a team at home. There was no better place to achieve this milestone”, says Jaime Serrano, CEO of the team.

The third round of the FIM JuniorGP™ has been a talisman for the Estrella Galicia 0.0 Team, which has continued its good run of results at the Circuit de Barcelona-Catalunya, located a few kilometers from its headquarters. The Barcelona team has added three more wins, thanks to José Antonio Rueda's double in the JuniorGP™ World Championship and the success achieved by Brian Uriarte in the European Talent Cup, which has allowed Monlau Motul Technical School to celebrate its 150th victory in different categories of motorcycling in its 25 years of history, a milestone.

The Spanish team once again demonstrated the great know-how of its technicians, who managed to find the exact key with the set-up of the bikes to be competitive in the Montmeló circuit. Thus, from the start of practice, the Team Estrella Galicia 0.0 riders demonstrated a pace and speed that placed them as solid candidates for pole position, something that José Antonio Rueda did twice in JuniorGP™.

In this category, the prelude to the Moto3 World Cup, Rueda was the lord and master at the Circuit de Barcelona-Catalunya. The Team Estrella Galcia 0.0 rider started from pole position in both races. In the first, he crossed the finish line with more than eleven seconds ahead of his pursuers, while in the second he was also intractable to win with an eight-second margin on the handlebars of his Honda. With these two victories, the Sevillian is one more leader of the competition before reaching the halfway point of the season. 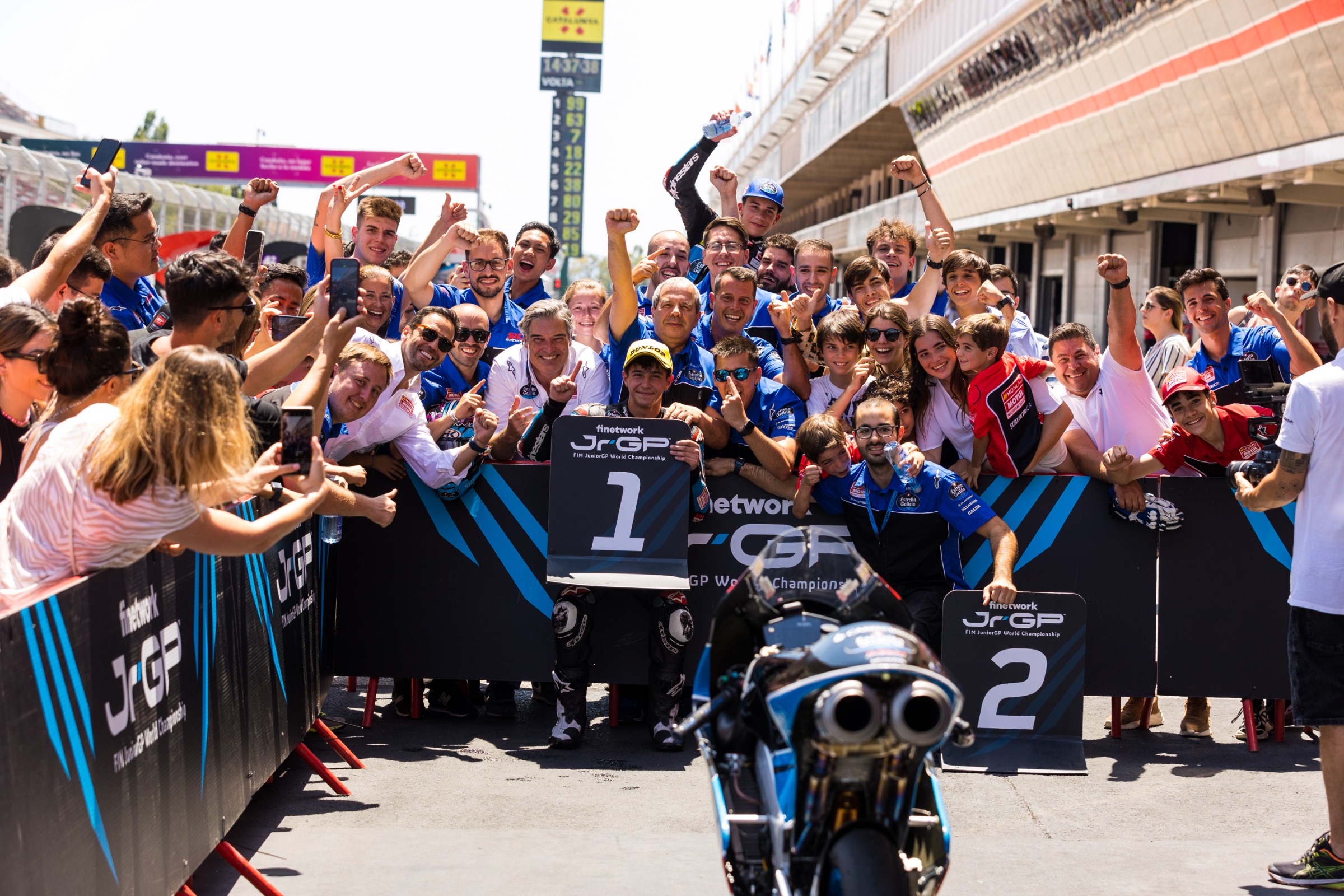 His partner Ángel Piqueras was another of the competitors who were at the top of the standings all weekend. The Valencian rider put in two good performances and came close to the podium in both races after showing, once again, that he is at the level of the best in the JuniorGP World Championship. Less fortunate was Facundo Llambías, who fractured his ulna at the end of Q2 and was unable to take part in the races after qualifying in a creditable sixth position.

The Estrella Galicia 0.0 Team completed a dream weekend with another victory, this time in the European Talent Cup. In this category, reserved for the youngest riders who follow the championship, Brian Uriarte was the great protagonist at the Circuit of Barcelona-Catalunya, where he took the victory after a masterful overtaking in the same finish line. In the end, only 14 thousandths of a second separated the Cantabrian from second place.

The other two representatives of the Spanish team in this class, the British Amanuel Brinton and the Finn Rico Salmela, qualified ninth and twelfth respectively. The Nordic rider is fourth in the general classification of the championship after the Catalan meeting.

“It has been a historic weekend that we will always remember. The three victories achieved demonstrate the great moment in which both our drivers and all the members of the team are. It has been a tough weekend, very demanding, and we have ended it with a great note, it is something to be very proud of. In addition, we have been able to celebrate our 150th victory as a team at home. There was no better place to get this milestone. For this reason, I want to especially thank our sponsors and supporters for their support, because they are also a fundamental part of this success”. 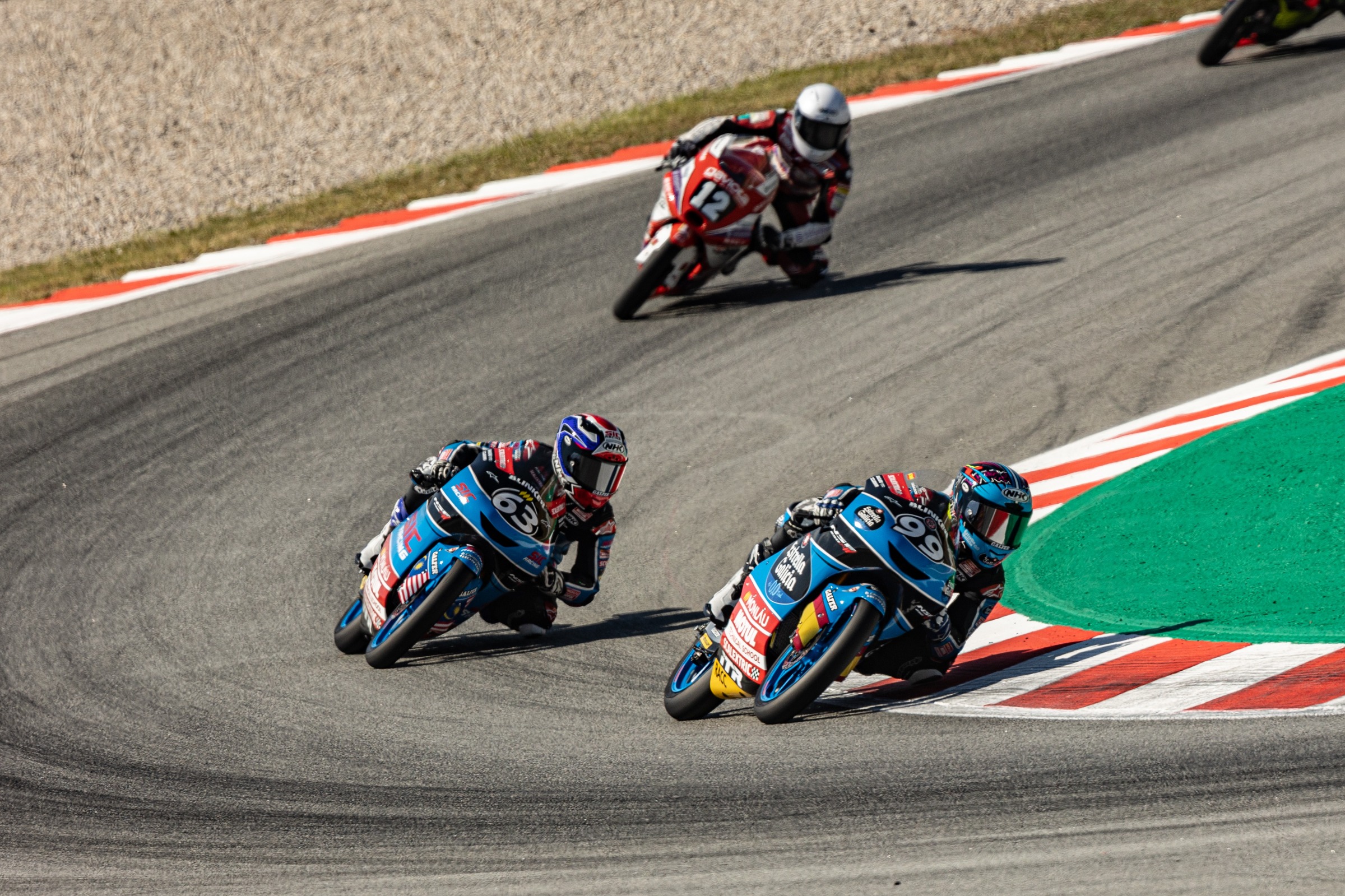 “José Antonio Rueda's performance has been splendid. He has won both races with absolute clarity, something very difficult to do in a category as even as the JuniorGP™, while Brian Uriarte has achieved a brutal victory in extremis, preparing very well for the finish line to overtake his rival in the fight for victory. We are super motivated. Now we just hope that Facundo recovers quickly and well. We send him a lot of encouragement from the team”.

The SIC Racing team, a formation that receives technical support from Monlau Motul Technical School, completed the weekend with two second positions for Syarifuddin Azman in JuniorGP™, while in the ETC, Hakim Danish was tenth.

The fourth round of the FIM JuniorGP™ season will be held at the Jerez Circuit on the weekend of July 1-3. The mythical Andalusian track will mark the halfway point of the campaign for the riders, in a meeting in which Team Estrella Galicia 0,0 will try to continue reaping successes to stay in the fight for the titles.