Championship contender Toprak Razgatlıoğlu and teammate Andrea Locatelli clawed their way back into contention to finish in 11th and seventh places respectively in Race 1 of the French 2022 FIM Superbike World Championship round held at Magny-Cours this weekend.

Conditions dried out in the Nièvre region on Saturday after two almost fully-wet Free Practice sessions hampered race preparations for the entire WorldSBK field yesterday. With just 30-minutes of dry running during Free Practice 3 this morning, every team including the Pata Yamaha with Brixx WorldSBK crew had their work cut out to confirm their race set-ups, as well as assess Pirelli tyre combinations, for the first points-paying race of the weekend.

Defending champion Razgatlıoğlu showed a clear advantage at one of his favourite race venues, setting the fastest lap time in FP3 by more than half a second from BMW’s Scott Redding before effectively taking “equal” pole position with Jonathan Rea (Kawasaki) in Superpole when both riders set the exact same qualifying time of 1’36.124. A count back of additional lap times handed the Kawasaki rider pole, with Razgatlıoğlu to start from P2, while teammate Locatelli found himself starting from P12 with less than two tenths separating him from the five riders in front.

The stage was set for another epic WorldSBK thriller as Turkish ace Razgatlıoğlu lead from the front and fought off a challenge from a resurgent Redding, as Rea made a mistake to crash out from the chicane at the end of Lap 2. Only moments later, after already amassing a 1.5-second lead, the Pata Yamaha with Brixx WorldSBK rider saved a potentially race-ending crash - as he struggled with some inconsistencies in front braking control - only to end up in the gravel trap at Turn 13. What followed was an epic fight-back from 23rd to score five potentially crucial championship points, demonstrating a relentless race pace to rival eventual race winner Alvaro Bautista (Ducati).

For the team’s #55 Italian rider Locatelli, seventh was not representative of the top five pace and consistency he has demonstrated time and time again since joining the WorldSBK class in 2021. He struggled with rear grip but the team hope to help him make a step to give him a chance to fight for front running results once again.

“So in the end, we finished Race 1 in P7 and I am not so happy because it was really difficult and I don’t yet understand why. It was difficult to start from P12 on the grid but also it was really strange the feeling with the rear tyre. I don’t know what we can do for tomorrow, but for sure we are working to try to improve for the Superpole Race: try to start more in front and then push for another good race for Race 2. We will try to understand what we can do looking at everything from the dry running today and we will see tomorrow. This is not my position and there is a bigger gap to the front, so we need to come back stronger tomorrow.” 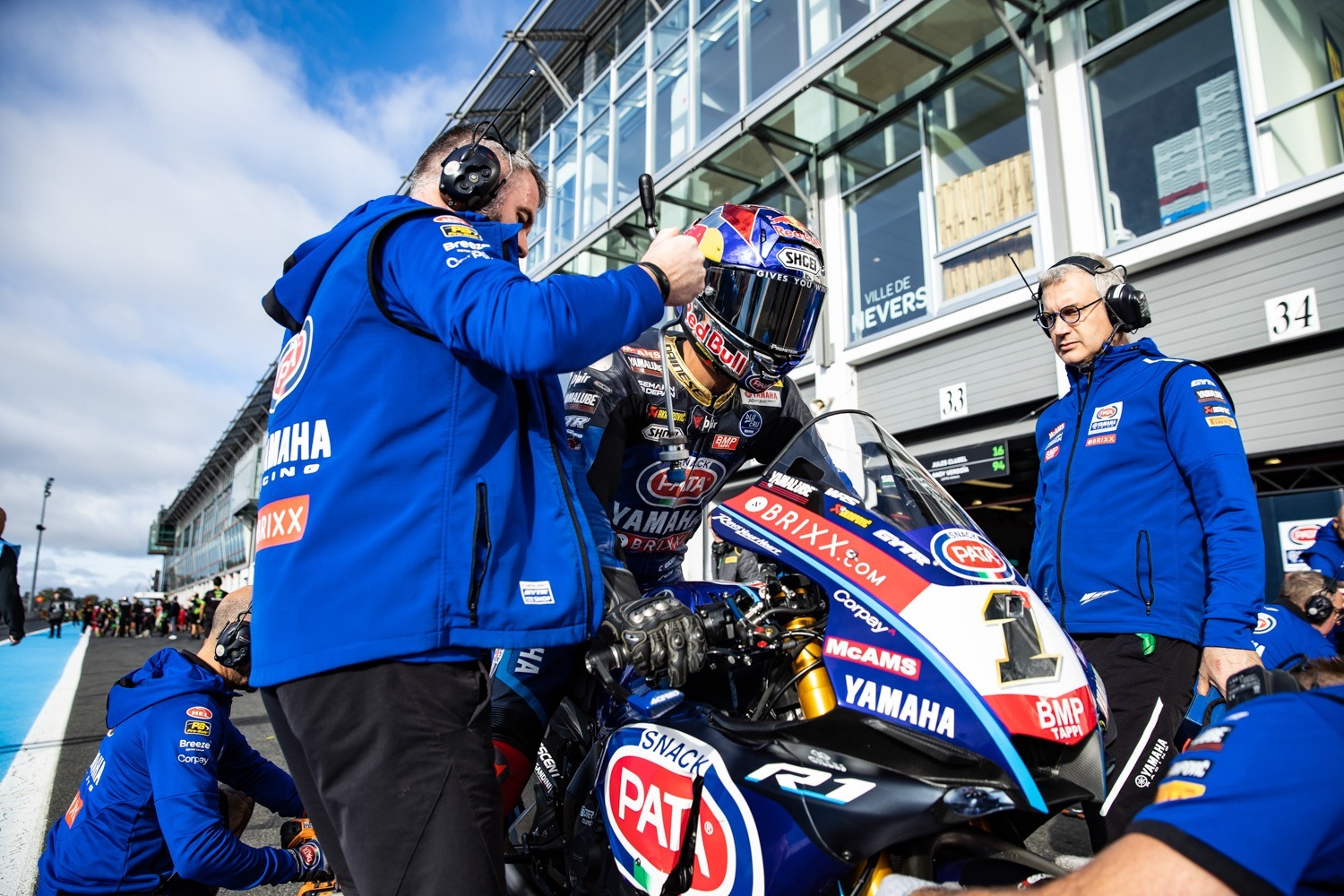 “We had a very strong start in the race today, but on the third lap we had the big mistake – since the start, at every corner with the front brake the feeling was a bit inconsistent. Turn 13, I try same braking as normal but I feel too much braking for this lever position and I almost crash. I go wide and try to come back on the track but then finally crash because the last part outside the track has really deep stones. But, I try my best to recover the best position for the points and finish the race 11th. We know we are strong, but strange crash today so for this I am disappointed. Tomorrow I hope we improve the consistency of the braking and we are fighting again for the win.” 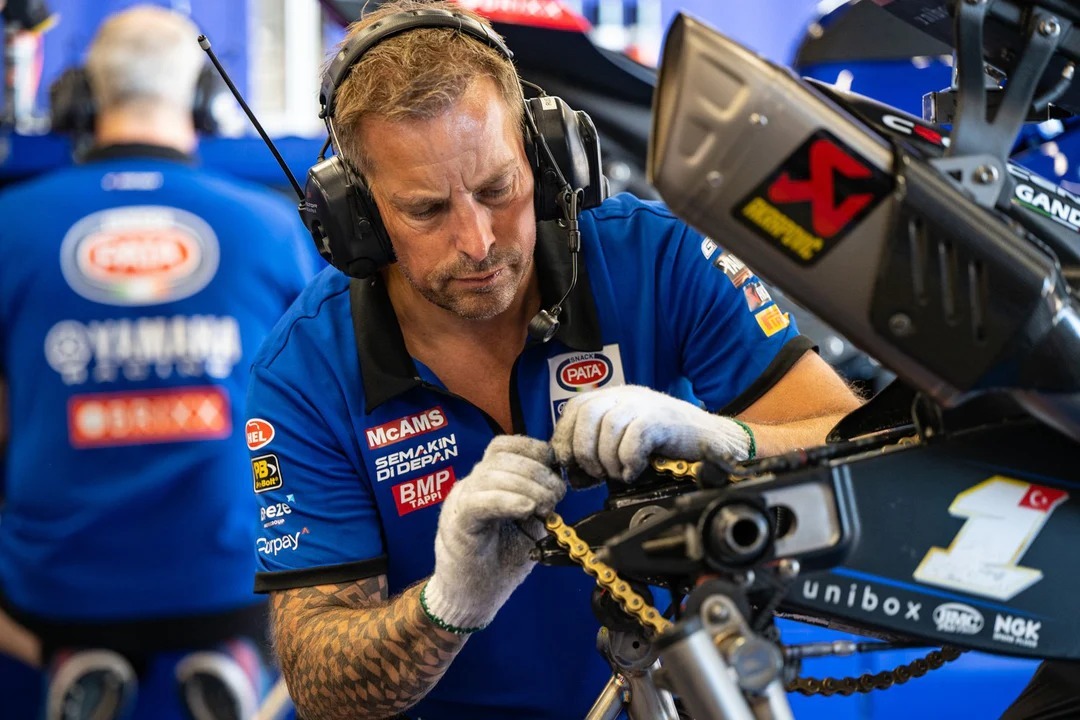 “For obvious reasons, a very disappointing start to the Magny-Cours race weekend and an opportunity to close the gap to the front of the championship has been lost. That said, for Toprak to show so much determination to claw back all that time and recover from 23rd to 11th place, taking five valuable points, is a positive in itself that we will use for energy tomorrow. His pace was every bit as good as the winner’s, despite some difficulties in stopping the bike consistently into the slow corners, which we will thoroughly investigate this evening. Tomorrow is a new day for Toprak, he’s extremely disappointed right now but there are positives to take from today. For Loka it was a strange race: he felt a lack of grip, both front and rear from the start – and whilst he was consistent and kept his rhythm to eventually finish P7, the gap to the front riders and to his own performance expectation was a lot more than anticipated. So - work to do for tomorrow on both sides of the box, but we’ll be approaching it in positive spirits.”

Pata Yamaha with Brixx WorldSBK’s Toprak Razgatlıoğlu turned disappointment into triumph today with two terrific race wins at the seventh round of the 2022 FIM Superbike World Championship at Magny-Cours in France.

After a stunning fight-back to 11th place yesterday, Turkish ace and defending WorldSBK Champion Razgatlıoğlu was on a mission for redemption in the 10-lap Superpole Race – engaging in an almost all-out brawl with regular rivals Alvaro Bautisa (Ducati) and Jonathan Rea (Kawasaki) before delivering a decisive victory this morning.

But it was the second full-length Race 2 that proved most thrilling. After a clean start from P1, the 25-year-old fought with Bautista yet again before retaking the lead on Lap 2. Behind him, a dramatic clash between Bautista and Rea halted the Ducati man’s hopes of challenging Razgatlıoğlu for the win.

A tussle with Axel Bassani (Motocorsa Racing) precluded an intense game of cat and mouse against a charging Michael Ruben Rinaldi (Ducati) until Rinaldi made a mistake, running on at Turn 11, and Razgatlıoğlu “put the hammer down” and pushed on to victory once again.

Teammate Andrea Locatelli found his own form of redemption in Race 2, fighting back to a solid seventh place after a couple of mistakes prevented him from taking a top nine result (and improved grid position) in the Superpole Race. The 25-year-old Italian fought hard against Yamaha compatriot Garrett Gerloff (GYTR GRT Yamaha) and pipped him at the line.

Now, with the second half of the season well underway, Pata Yamaha with Brixx WorldSBK will return to Barcelona in a fortnight for the Catalunya Round, taking place from 23-25 September. 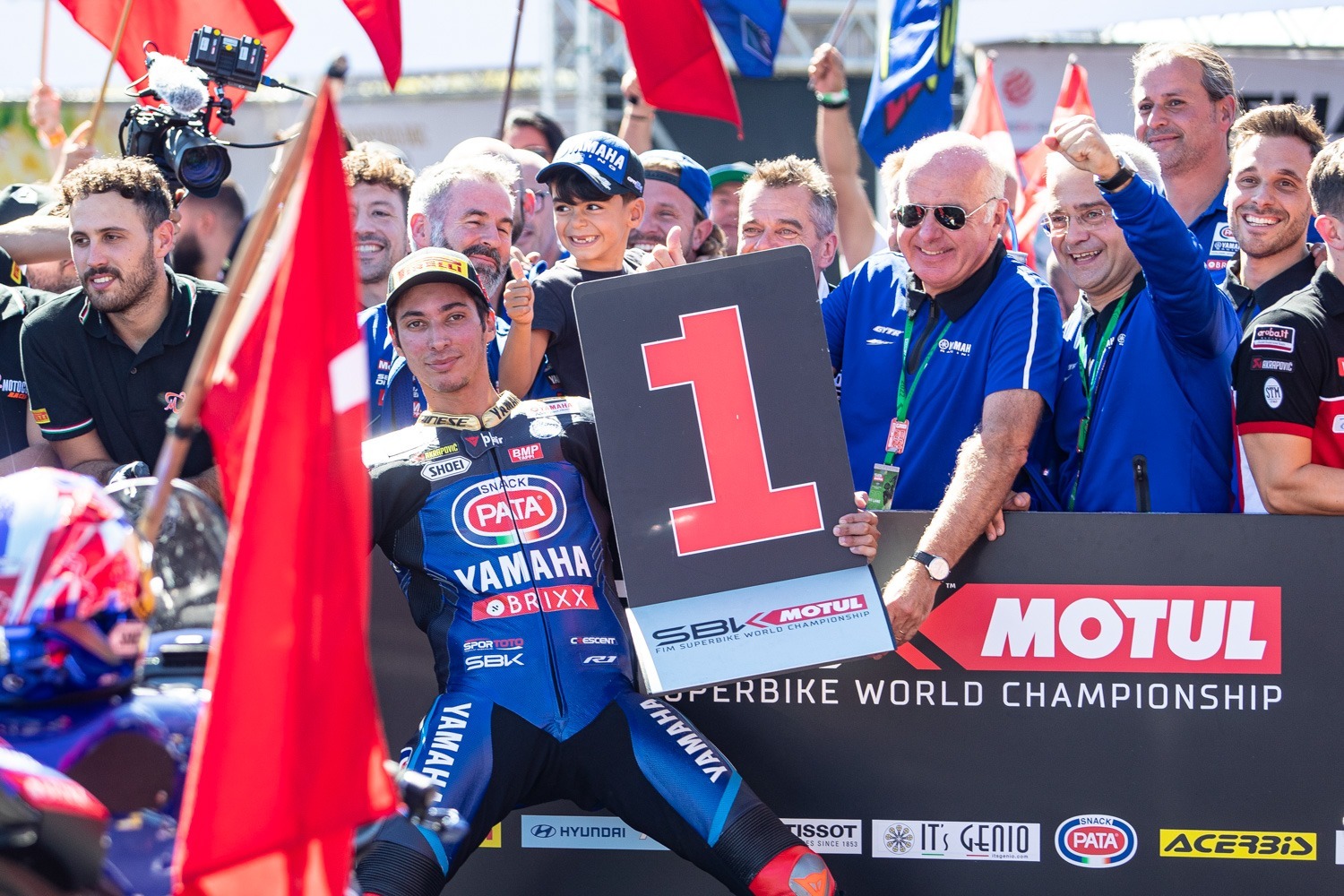 “Yesterday for me was very bad luck, but today here we are very strong. Superpole Race we win and important for me Race 2, because we take very big points and I am winning. I am very happy, this is my favourite track and normally my dream is for three wins this weekend but yesterday for me was bad luck. Today we changed all the braking kit and I am feeling much better, we also improved the bike and I just keep fighting for the win. I see Rinaldi, the last 10 laps, I am just watching but he started to slide with the rear tyre and I say, okay, now I pass him and try a good pace. Sometimes it is good planning in the race! But we are winning again and I am happy.” 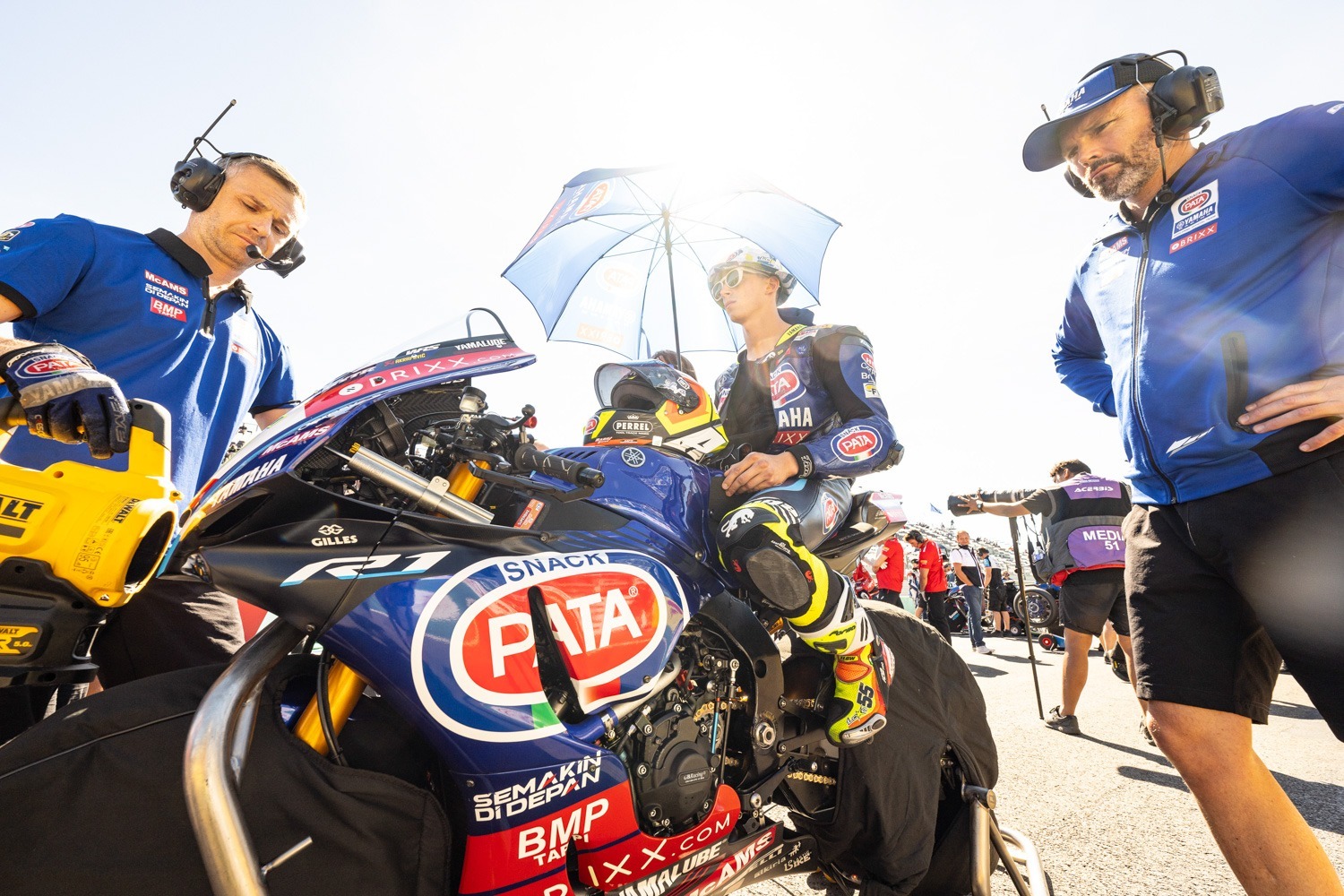 “In Race 2 we improved a lot in respect to yesterday and also to the Superpole Race this morning, especially because in the sprint race I did some mistakes in the first lap and the last lap. We lost the opportunity to start Race 2 from P9, so we started again from P12 but was a different story today! I could improve on the lap time and the rhythm, so this was a big improvement and also I fought a lot until the end to try to stay in front and finish P7. For sure, the results were not my expectation for the weekend but this is what we could bring home in the end. Now we need to go from here and push again for Barcelona to close the gap and start closer to the front again.” 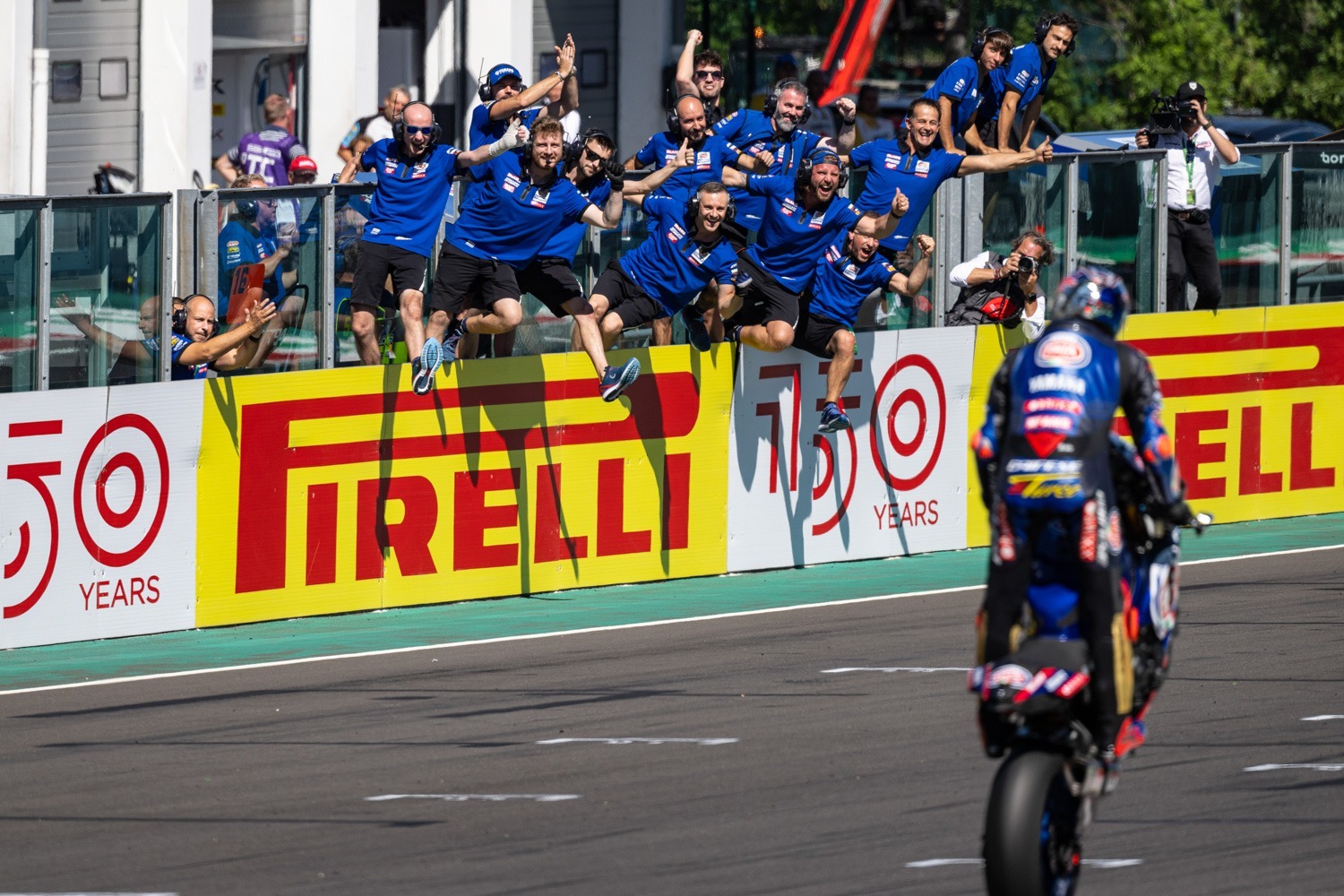 “Sport can be strange! A bit of a nightmare at the circuit yesterday became a dream day today. I can only say congratulations to Toprak and his team for reacting so positively to yesterday’s disappointment both to take such a hard-fought win in the Superpole Race and to dig deep to ensure victory in Race 2. There are still many races to go this season, a lot can happen in either direction, so we’ll just keep treating each race as an individual event and do our best. Loka also had a much better Sunday and in particular, Race 2 was a great step: converting a 10-second deficit to his Yamaha compatriot Garrett Gerloff yesterday to beating him in Race 2 this afternoon. Loka had a great test at Barcelona recently, one of his favourite circuits, and the recovery in form he made this afternoon is a great base to go back to Spain in two weeks’ time.”