Track records tumbled from Free Practice 3 onwards, as the Turkish ace got to grips with the evolving traction on the new asphalt – not only did his pole position time completely scrap the previous record, it became the biggest pole margin (1.052s from Jonathan Rea in P2) achieved in WorldSBK for the last 15 years.

Razgatlıoğlu’s full 21-lap dominance over Race 1 means he is now the “winningest” Yamaha WorldSBK rider with 28 wins, and is also written in the history books as the WorldSBK series’ milestone 900th race victor.

It was a big day for teammate Andrea Locatelli as well, who celebrated his first WorldSBK front-row start with the third-fastest lap time in Superpole to qualify behind Razgatlıoğlu and Rea. The 26-year-old Italian followed it up with a thrilling on track battle to finish fourth overall in Race 1, taking the fight to Alvaro Bautista in the opening stages and digging deep to finish strongly in one of his best performances this season.

The Riders’ Championship stays within mathematical reach for at least another day: now at a 77-point deficit to Bautista after the mammoth effort by robotic race-pace Razgatlıoğlu and the entire Pata Yamaha with Brixx WorldSBK team behind him. 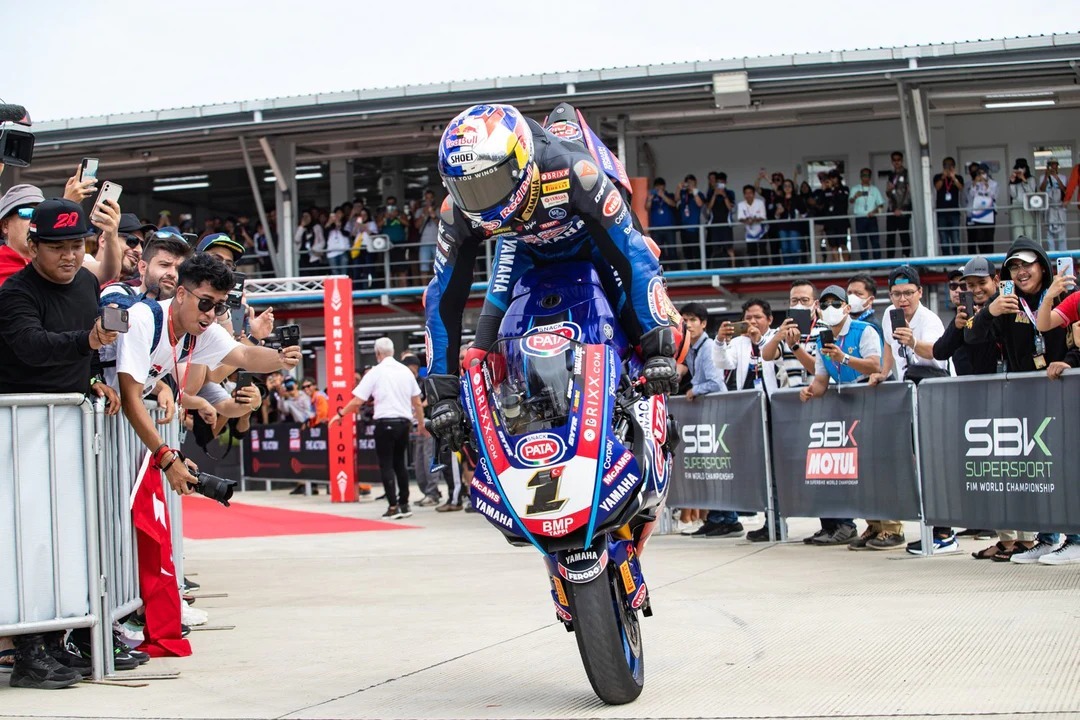 “Today, I am very happy because we start strong and also FP3 in the morning we see very good lap time – and after qualifying an unbelievable lap time! For me, the race is most important – it was very good but not easy for everybody because very hot conditions. In the race, I have just one mistake but anyway we are not crashing and we finish the race with the win. On corner six, I touched the dirty line and after corner seven I close the gas because rear exit sliding – there is just one line, so I am very careful here. I’m not looking at the championship, just five points it is changing I think, but I am very happy today we are winning again. You know, I am just looking race by race and this weekend I try for three wins. Thanks to my team, they never stop working to give me the best possible R1.” 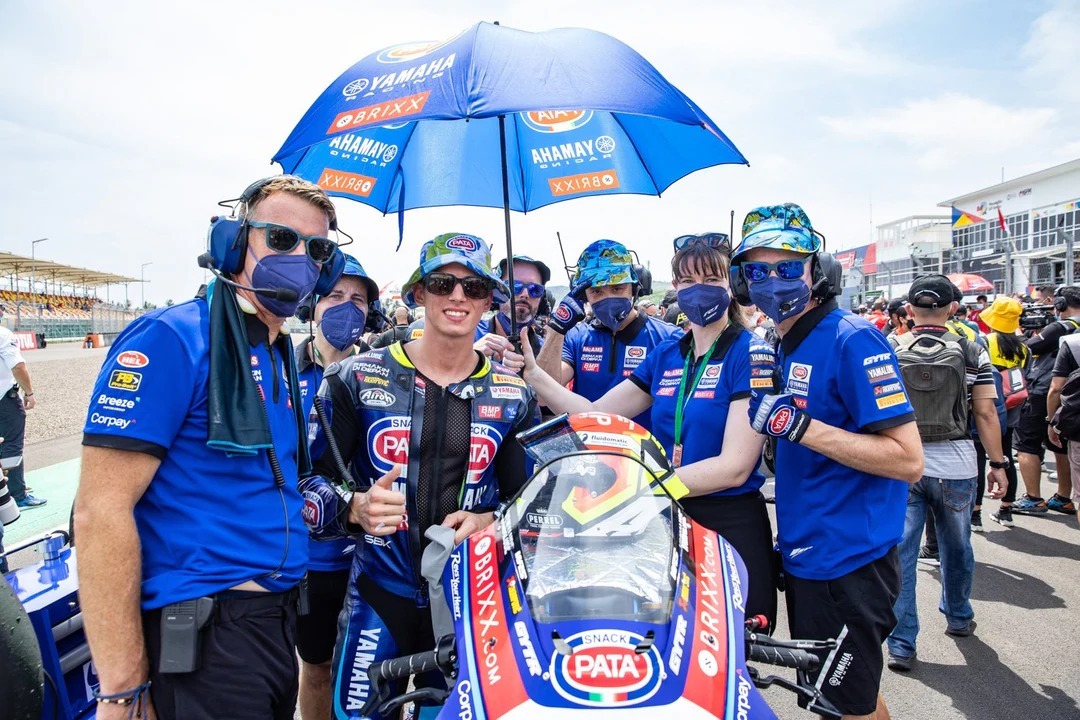 “It’s a positive day for us, for me and my team. We have been working hard since Friday so today is a positive day for us. Unfortunately, I lost the opportunity to stay a little bit with Johnny when I made a mistake after eight laps, because in the end my race rhythm was not so far from his, so we will try again for tomorrow. On the track you have just one line and you need to be every time constant and not make mistakes. It’s important to have a good confidence and not lose the racing line. I want to say thanks to my team because the bike is working really well and means I can push harder. I am really excited to be able to make my first front row today – it’s important for me, for my future and for me to believe in myself. Now, we’re looking forward to tomorrow, I think we can finish the weekend really good. I want to try to follow Toprak and take a good result, but it is also important to stay in the front group – we will see but we will try to enjoy until the end!” 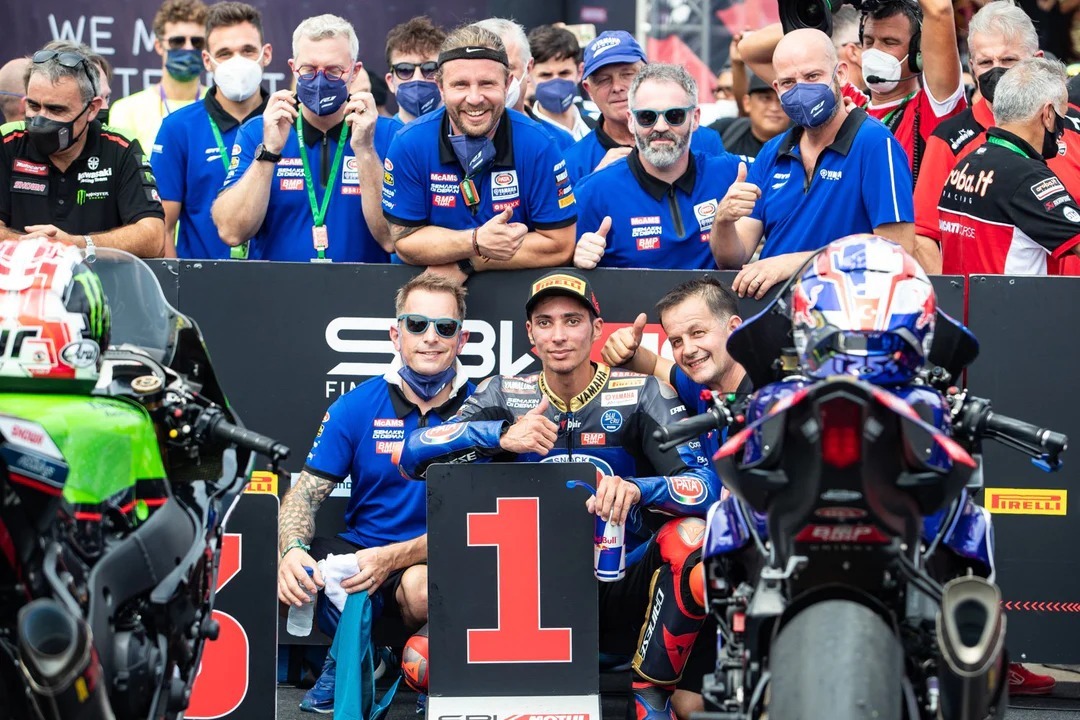 “Toprak’s been dominant all weekend, putting together an impressive 20-lap long run in FP2 yesterday with a faster pace and more kilometres covered than anyone else on the grid, and that form continued today with a blistering lap time in FP3 and pole position by over a second which is almost unheard of! Despite that, the race still wasn’t easy with over 60 degrees Celsius of track temperature and all the challenges of a constantly changing track surface. There was plenty to keep his attention, including one big mistake in Turn 7 – but in the end, the victory never looked in doubt and he was able to react to any pressure that was put on him. Congratulations to Toprak and all his crew for another fabulous effort. Loka has had his best Saturday of the season and as a team we worked very well together in qualifying. We got both riders out early, made sure we weren’t compromised by traffic or yellow flags in either run, and Andrea tucked in behind Toprak to put together a superb lap for his first front row start. One big error which was so easy to make on this track, in the last sector, cost him the chance to try to challenge Jonathan for the podium – but he re-found his rhythm for the end of the race, and a strong fourth position was well deserved.”

Pata Yamaha with Brixx WorldSBK rider Toprak Razgatlıoğlu performed a clean sweep of the 11th round of the FIM Superbike World Championship at Mandalika International Street Circuit in Indonesia today, winning both the Superpole Race and Race 2 to complete “the triple” – as teammate Andrea Locatelli celebrated a third-place podium and superb fourth position to complete Pata Yamaha with Brixx WorldSBK and Yamaha’s best ever overall WorldSBK weekend.

After the previous day's stunning Race 1 win, Razgatlıoğlu went on to claim race honours in all three races – along with fastest lap in each and that incredible circuit-record pole position – in a completely dominant weekend for the Turkish star and his R1 WorldSBK.

Teammate Locatelli returned to the podium with a fantastic P3 in the Superpole Race, the first podium since Assen earlier this year after his first ever WorldSBK front-row start yesterday. The team’s Italian rider completed his best weekend of the season with another fine fourth place in Race 2 to match his Race 1 result and round out Yamaha’s best-ever team points haul in the WorldSBK category since the 10-lap Superpole Race was introduced in 2019.

Pata Yamaha with Brixx WorldSBK and the rest of the WorldSBK paddock heads directly to Phillip Island for the season finale next weekend, with track action from 18-20 November. The thrilling southern Australia venue holds fond memories as the site of Razgatlıoğlu’s maiden victory in his first race aboard the Yamaha R1 WorldSBK from Race 1 in February 2020. 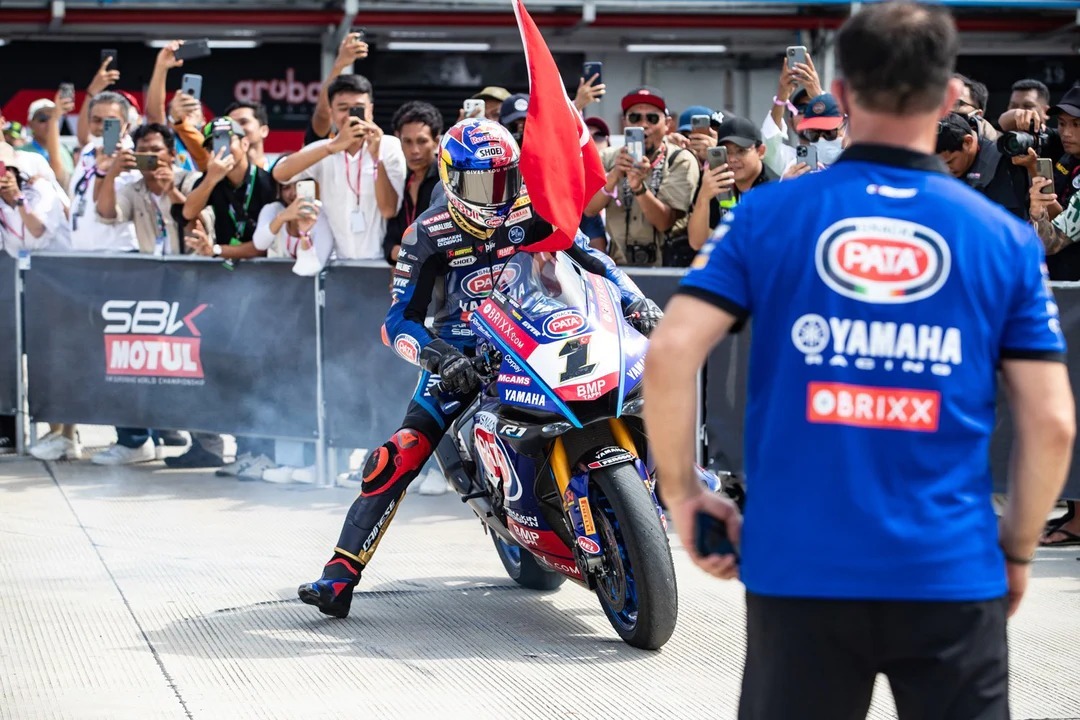 “For me it was an unbelievable weekend. I have three wins, this is a really good event for me and I’m very happy! Thanks to Yamaha and my team, my bike was good in every session and I could manage the races in the way I want. Congratulations to Bautista – very good season, we are fighting every race and we have great respect also off the track. Okay, we lose the championship, but I try my best and get three wins this weekend, we could not do more than this today! I love this circuit, now maybe it is one of my favourites and I am already looking forward to come back next year. We keep fighting next weekend in Phillip Island, it is where I won my first race with Yamaha so I have good memories of this track also.” 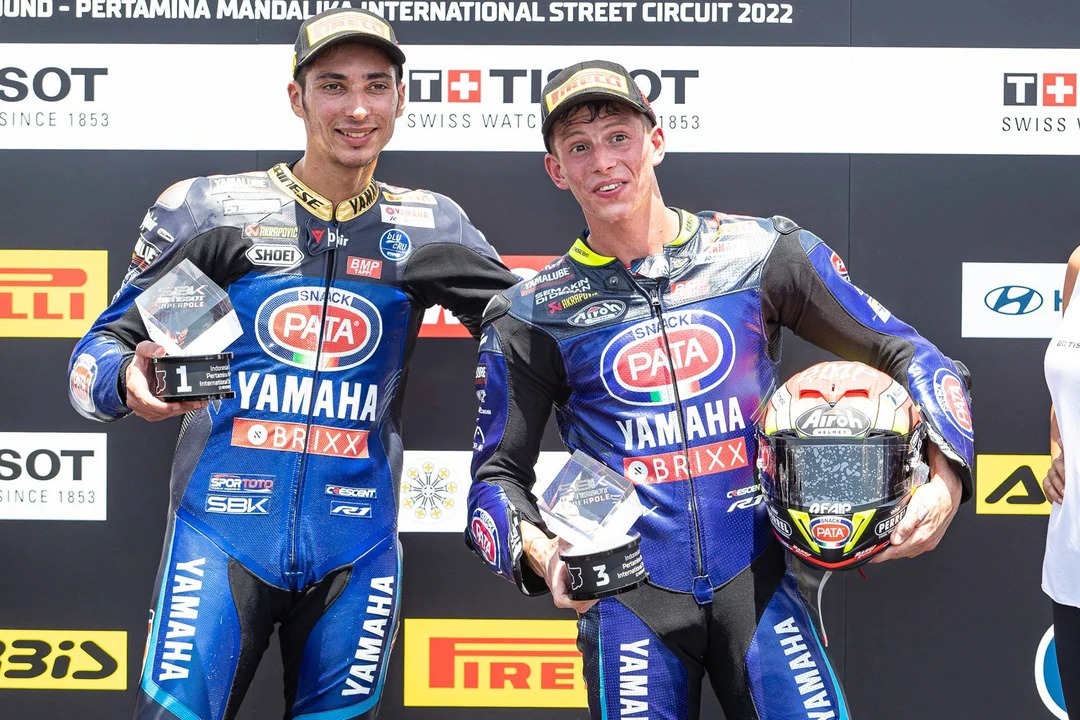 “I’m really happy about today, because in the end after yesterday we understand everything a lot better. We prepared very well and I was feeling confident this morning to push hard in the Superpole Race. It was an important result, we were fighting a lot at the front and to get third position for the Race 2 grid. I never thought that it was possible to get a podium here, but I arrived ready and had a lot of confidence with the bike from immediately on the first day. After a lot of months without the podium, I enjoy a lot! We had a good start in Race 2 also, but I made one very small mistake and fell a bit behind the top three guys. Fourth is still positive and I now take a lot of motivation for the final round at Phillip Island next week. I really like the track and I want to end the season in a good way.” 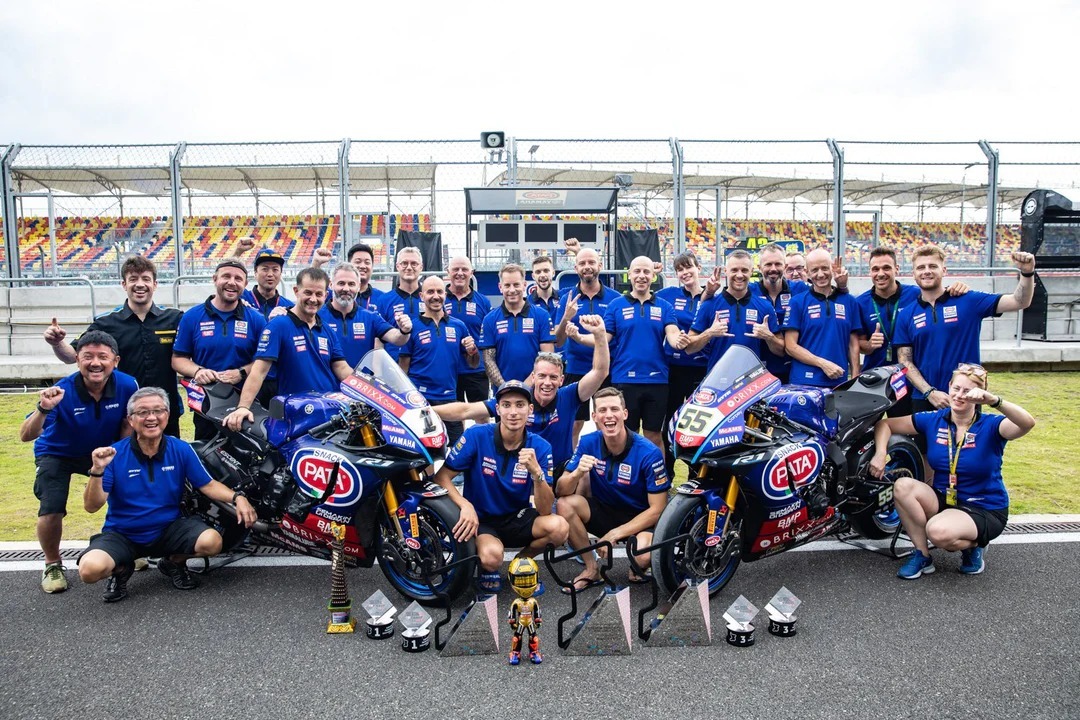 “What a fantastic weekend for the whole team! Toprak just keeps surprising us at how far he can raise his level and despite a bout of either food poisoning or dehydration that was making him feel pretty “second hand” today, he was absolutely dominant. As positive as Toprak’s results were, seeing Loka back up his superb Saturday with his first Superpole Race podium of the year and a really strong fourth position in Race 2, meant that collectively we’ve had Yamaha’s best ever total points haul in a single weekend alongside the utter domination of pole position, three wins and Pirelli Fastest Lap Award in every single race. Sadly, this performance was not enough to keep Alvaro from wrapping up the championship – he and his team have done a fabulous job this year and you cannot take anything away from their title victory. Many congratulations are due and we look forward to the challenge of fighting them for the title again next season.”